A Mother and Son's Activism for Transgender Awareness

The following documentary films Anyone and Everyone and In God's House feature Harold and Ellen Kameya:

She is a young Chinese-American, eldest daughter with a younger brother who is gay.  She started attending PFLAG support groups, including SGV API PFLAG.  Her love and respect for both her brother and her parents prompted her to attend PFLAG meetings.  It was important for her to serve as the "bridge" to the cultural divide between the two generations.  This wedding video is a very special milestone in her brother, David's life.  She is so very proud to share the event of her brother finding love, happiness, and commitment.

The Asian Pride Project, based in New York City, participated during the 2012 National Queer Asian Pacific Alliance Conference in Washington, D.C.  Parent participants from different parts of the nation delivered public service announcements and messages in their own Asian language that was addressed to other parents and families of API LGBT.  Currently, these videos are in the editing phase.  Bilingual messages in Chinese and Tagalog are among the featured.  The Asian Pride Project is an online space to share stories and experiences with each other, in all languages, in pictures, sounds, and words.

"I Am" Screening and Panel Discussion Event: 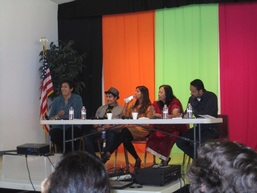 Sponsored by API Equality LA, Satrang, and the South Asian Network, a free community event was held July 2012 in the city of Artesia, CA, which is a predominantly Indian community.

I Am chronicles the journey of an Indian lesbian filmmaker who returns to Delhi, eleven years later, to re-open what was once home, and finally confronts the loss of her mother whom she never came out to. As she meets and speaks to parents of other gay and lesbian Indians, she pieces together the fabric of what family truly means, in a landscape where being gay was until recently a criminal and punishable offense.

In August 2012, the following televised and online news article featured a former city councilwoman, Cheryl Chow.  Cheryl Chow was diagnosed with brain cancer and does not have much time left, but the former teacher, principal, Seattle City Council Member and School Board Member has one more task to do - she wants to come out.  In the interview below, she advises young people not to wait as long as she did.